The debut LP from Museum of Love is now available for preorder at the DFA Store. Initial announcements had the album releasing in August, but it now looks as though we’ll have to be patient for a few more weeks at least.

Museum of Love is the first post-LCD Soundsystem aftershock that I’m really excited about, and I have high hopes for the impending tremors. Pat Mahoney sometimes felt like Robin to James Murphy’s Batman, and that might have led me to overlook the LCD drummer’s overall impact on the band and the label. But I’m optimistically looking forward to an album that’s more Nightwing than Teen Titans, and judging by the initial streams (including last year’s sweet “Down South”), I think my hopes are well-founded. 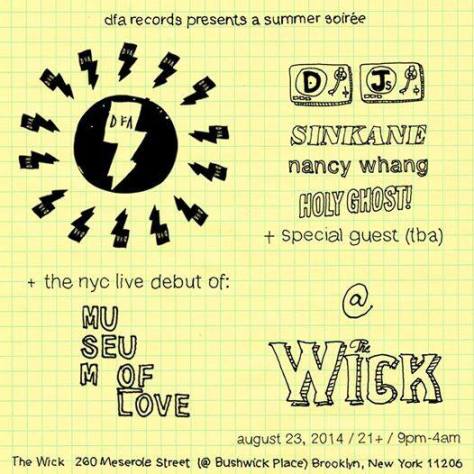 I love my City, and I love the Bay Area. I love the fog, the music, the foggy diffusion of light & sound. But when I see stuff like this little DFA fiesta from last weekend, I get pretty jealous of my pals living in Brooklyn.

Speaking of earthquakes and local love, the fine folks at SF’s Bluxome Street Winery are organizing a bus trip tomorrow to help folks in Napa with the recovery effort. Check out the EventBrite page for more details.