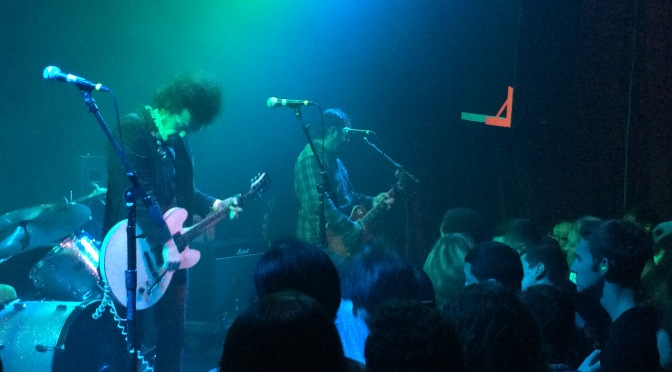 We had been at Dobb’s Ferry for a good half hour when I finally admitted to the three other people with me: “Sorry – I’ve heard only about 50% of what’s been said.”

The three bands we saw at Rickshaw Stop later that night were of steadily increasing volume, and steadily increasing awesomeness. We were having trouble thinking of other bands from Philadelphia, but then the drummer of Lithuania took off his sweater to reveal a Teen Men shirt. And I thought, oh yeah, Clap Your Hands… I tried to bring that up to MH during the crescendo of “Hardcore Friends” but I don’t think it came across.

We were having trouble talking because it was really loud. Really, fantastically loud. And just as last month’s Battles show reminded me of the first time I saw Explosions In The Sky, this gig reminded me of the first time my ears were taken over by Asobi Seksu. Coincidentally (or maybe not really, because I really wanted to tie last night’s show in with this narrative), it was at the same event.

It was nine years ago: November 11, 2006. Thank you Internet. Somewhere, possibly, in that aforementioned You Make Junk shoebox, hopefully stored in my garage, is a ticketstub. But searching the web was easier and faster.

I remembered the name of the festival: Be The Riott, with two t’s. What that means exactly, I still have no idea. Something related to the corporate Scion sponsorship. At the time, I hated the idea. Don’t tell me what to do, Toyota! Now, sponsorships and festivals go hand-in-hand. And if Chipotle or PayPal wants to make it easier to bring a bunch of great acts together on one day, I’m all for it. I’m a pretty savvy consumer. On this particular day, all I really knew was that several bands would be performing at a one-day festival of sorts at the Bill Graham Civic Auditorium, including The Wrens (who at the time were rumored to be working on a new album), Tokyo Police Club, Explosions, Zion I, and, the main draw for me, Asobi Seksu. They performed in one of the side stages in a room that couldn’t have been bigger than The Rickshaw. It was my first time seeing them, and I fell completely under Yuki’s spell. Not just because she’s gorgeous, either: that show was, to this day, the loudest thing I had ever experienced. Could be that the performance irrevocably diminished my hearing to the point in which nothing will now seem as loud, but whatever. It was memorable.

Also memorable was the fact that at one point, maybe two or three songs in to the set, I turned around and discovered that I was alone. My friends had bailed. I found them in the hallway afterwards. “Too loud?” “Too loud.” “Way too fucking loud.” For years after that, this show was used as an indicator that I had seriously damaged my hearing.

So this morning, on another planned sick day/staycation, I was sitting in my doctor’s office for a routine checkup. She went through one question after another, including last dentist visit and eye exam. Okay, I thought, if she asks about my hearing… we’ll have that conversation. I don’t want to be the old guy at the party who nods and pretends to catch everything that’s being said. Oh wait – what if I’m already that guy? I should bring it up. What, we’re done? I’m in great health? Sure, I’ll take a flu shot.

Next time, maybe we’ll talk about a hearing test.