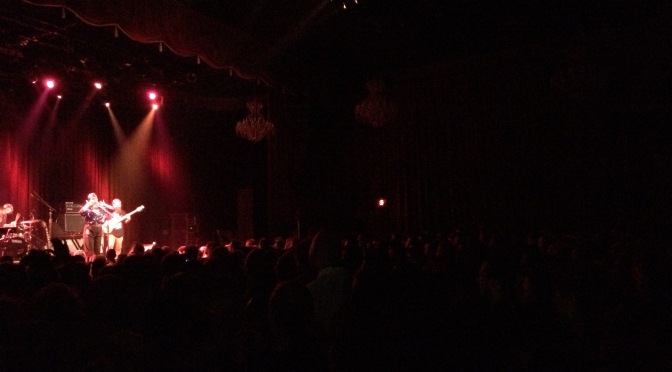 I haven’t left a show, earlier than I wanted to, one single time during The Turnaround. That’s almost 40 club shows, major concerts, and outdoor festivals in the last twenty-one months that I’ve enjoyed for exactly as much as I’ve wanted to. That wasn’t always the case in the past, and I was usually pretty okay with it.

(I am now reminded of sprinting out of Rickshaw Stop early last year because MMJ suddenly remembered that her parking space had street cleaning restrictions that kicked in at midnight. But that was memorable and fun. And I never let her forget it.)

Last night at The Fillmore, however, I had Slim’s ’05 flashbacks.

It wasn’t just that we were pushed into a particularly dense part of the floor area, downstage right. The Hiatus Kaiyote show was sold out, but it didn’t appear to be any more crowded then any other sold-out Fillmore shows. Everywhere we moved last night, even in the bar areas, was hot and stuffy. By the time they came back onstage for the first part of their encore, it was downright suffocating.

Poster be damned, though. We were leaving. As luck would have it, however, they were handing out posters at the bottom of the steps regardless. The girl who handed me mine muttered to a co-worker: “Why is she still playing?” I couldn’t explain it either. I also couldn’t explain why a venue that I had so often appreciated for its excellent ventilation and comfort level was suddenly feeling like Slim’s in the early aughts. My last straw at that venue was a Metric show in ’05. After sweating and choking through the opening act, SW and I bailed. I’m not sure I’ve been back since.

The Fillmore, of course, gets a longer leash. It was bad enough that the band itself, in between cosmic neo-jazz departures from the physical plane, were grounded enough in the sweltering reality to comment on the shit atmosphere onstage. “We’re going to play one more song before we… melt into puddles and disappear…” That would have made a tragic headline, yeah?

But, like I said, longer leash. We see how it feels for Battles this Friday.

Also, for future self-reference: ticket stubs, gig posters, and the digitization of my concert memories. It’s all coming together. And it was this Tuesday night show, and the realization that I can track practically all of the shows I’ve been to since ’13 in this blog, that have inspired me to start sifting backwards and forwards in time. Suddenly, more meaning (or possibly just more questions), for the Dragging Handclaps in my life.