On their Twitter homepage, locals The Y Axes explain that they “are not the future of pop music, [they] are pop music from the future.” I’ve seen them live a couple times now, and have enjoyed the hell out of Sunglasses & Solar Flares since its release last year. I’m happy to report, then, that the future’s pop music reminds me a lot of Bay Area rock circa 2003.

Or maybe it’s just the venues.

There was something about those Lookout! and Asian Man shows in the East Bay, in the City, and in San Jose a decade ago. I haven’t listened to some of these bands in years, but I can remember seeing Squirtgun spazzing onstage, The Pattern doing their best Hives impersonation, Pretty Girls Make Graves playing almost an entire set in the dark. It was energized and alive, and, for me, just what I needed while I clawed myself free of a crap time in my life, bouncing between woe-is-me emocore and don’t-give-a-shit punk. 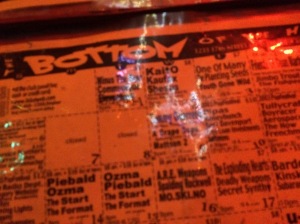 For almost a year I had been telling MMJ how Bottom of the Hill was my favorite venue in the City and we needed to see a show there. It finally happened this past Friday. And before The Y Axes teleported on stage, I singled out one of the old paper calendars taped to the wall between the bar and food counter. I pointed out one show, of many, that I remembered attending. July 2, 2003. Shesus, Koufax (misspelled Kaufax on that calendar, and KaitO (the UK edition).

I was living in Davis and in the middle of lives, loves, and questions about when and then. And that Wednesday night, I drove back to my hometown after work, by myself, just because. I knew nothing about that lineup, other than the fact that Koufax had a Get Up Kids connection. But it didn’t matter. Didn’t matter that I was alone, or displaced, or confused about my present and my future. I had a great time, and returned to work, bleary eyed and strangely optimistic, 100 miles and several hours later. It was a turning point, similar to the Turnaround I’d experience almost a decade later.

And how wonderful that Bottom of The Hill has preserved so much of my life and experiences over the last fifteen years. BBQ Sundays. That old pool table. Jens Lekman playing his acoustic guitar on the patio stairs under the stars… I know The Fillmore is special, and holds an historic mystique for many performers and music fans, but it’s of a different era, and it has a different connection to the City.

So when The Y Axes time traveled back from the future to play their sweet new tune “Monsters,” I was time traveling as well, explaining to the English-idiom-loving MMJ what “a walk down memory lane” meant. The Y Axes could have materialized anywhere, of course. And they probably do. I’ll bet they regularly enter singularities for the opportunity to tear up places like 12 Galaxies and Cafe Du Nord back when their doors were still open and the carpets still damp with beer. But this weekend they played BotH, and I believe they knew full well how special that is.