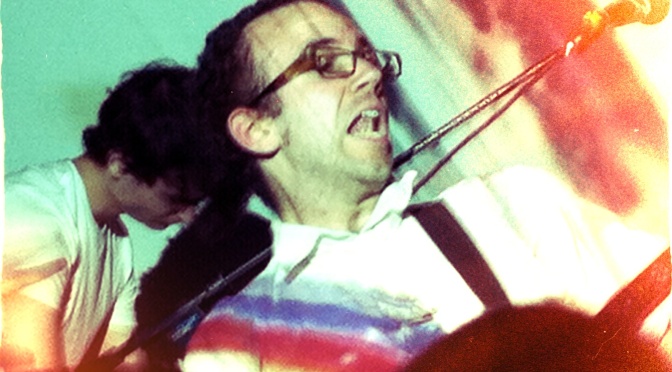 At 9:00 last night I was eating a sandwich on the sidewalk parklet outside DNA Lounge when DH texted me: “Dude come up here you are missing something weird.”

Coming from DH, that meant something.

The “something weird” was the last entrant in the open mic portion of the 8BitSF evening. A weathered Tina Yothers meets Michael McKean from Spinal Tap in a flowy pirate shirt dropping a David Byrne staccato over aggressive video game beats. Not just weird, but also awesome.

Glad I swallowed my sandwich in two bites and ran upstairs to see the tail end of this guy’s set, but I was also happily marveling at the crowd assembling street level for the show in the main auditorium.

I was first exposed to the True Sons Of Liberty the summer before high school, working in the print room of an architectural firm in the City. I had recently discovered The Clash, and made the mistake of trying to talk about the “glory years of punk” with the twentysomething dude who ran the space.

The rest of the summer he tried to prove to me that 80’s punk was the shit, mainly by blasting TSOL on his Yamaha boombox.

So a good portion of the crowd gathering for the gig in the big room didn’t surprise me: balding dudes in jean jackets and DRI patches, many of whom were probably similarly misguided when it came to differentiating redemptive eras of punkdom.

Upstairs, ironically, at the 8BitSF show, was a room full of folks devoid of self-obsessive posturing, possessed of the kind of energy and enthusiasm the nouveau confused had only heard about. The real punk show is one flight up, kids.

And it was another great night. The opener was decent (although DH did need to point out that they should “turn up their Gameboys”), and the headliner, Slime Girls, tore it up, particularly with their closing cover of The Blue Hearts’ “Linda Linda.”

But the highlight had to have been the gypsy jazz chiptune folk freakout orchestrated by Matthew Joseph Payne and his newly formed, as yet unnamed band. As MDDG put it, midway through the set, “This is EXACTLY the amount of weird I needed to see tonight!”

Not just weird, but also awesome. Very much so. (Thanks in no small part to the sweet visuals, courtesy of DH.) Keep it coming, MJP & Co.

4 thoughts on “True Sons Of Chiptune”